Setting up a Remote Development Environment with OpenSSH Server

(sshd or daemon for you Linux Folks)

COVID has revolutionized the way we think about work. Setting up a remote development environment is suddenly high on your list. While the sudden uptick in remote work is new, the tools necessary to setup a secure remote workflow have been getting easier and more powerful over the years. Now, there are many free tools available that will free your developers to work as they wish and Microsoft playing along with features in Windows and new IDE tools.

Gone are the days of clunky terminals and inelegant RDP. Visual Studio Code’s new remote code extensions and reliable old SSH allows the big three operating systems to play nicely together over a secure tunnel. The result can a blended environment where not even a single line of code needs to live on your local machine, regardless if you prefer Mac, Windows or Linux.

If you have a project that prohibits running things locally, you can setup a powerful stack. Using the power of SSH’s tunneling and key sharing, you’ll have a remote development environment with single sign on and only one key to worry about. The beauty of this setup is that you can run it on any server running SSH. We’re demonstrating a mix of Mac, Linux and Windows to highlight the portability of this setup and some of the hurdles that you might encounter. As long as your server can run SSH, you can use this setup. Windows Open SSH Server doesn’t support everything, but it’s very usable.

In this three part series, we’ll show you the ins and outs of setting up a remote development environment, and point out some caveats and gotchas along the way. We will walk you through the steps necessary to get things running from a local machine, connecting to a development server and access a git repository – all without a line of code running on the developer machine. Add in SSH’s local proxy, and you can access server resources without running them locally or even worrying about ports. Windows-based development servers don’t get key sharing because of a limitation in SSH, but there is a slightly inelegant workaround for that too.

Setting up your Server

By the end of this guide, you will have a fully configured Windows Server 2019 instance running an SSH Daemon through Windows or WSL Ubuntu. In part two of this series we walk through the setup of pre-shared keys for password-less login, and in part three you will learn how to connect VS Code to the server, code like you were sitting at the machine, and interact with the repository.

This guide assumes you know how to:

To show how we can have Mac, Windows and Linux playing nicely together. We’ll be using:

VSCode’s remote development tools provide SSH access along with Containers and WSL access. While we can run it on a Linux server directly, folks using IIS and other Windows software are no longer out in the cold. We’ll demonstrate setting up a Windows server from the ground up to show how easy it is to get to work. We’ll be using RDP to configure the server, but it won’t be necessary by the time we’re done.

From your AWS console, set up your development server:

Connect to your instance over RDP

With your instance create and ports opened, you should be able to find your EC2 Instance and connect.

Now, you can download the RDP connection file and retrieve the password by uploading the PEM key you chose when you created the instance.

If you don’t want WSL, you can install OpenSSH directly on the server. This setup has a few things to consider:

# Make sure that OpenSSH is available for your Windows

You can read about the finer points of configuring the OpenSSH Server on windows here.

If you do  all of the OpenSSH features and the power of Linux running along Windows on the server, you can WSL. This setup also has a few things to consider:

Now, you can install the Linux distribution of your choice. You can install multiple flavors at the same time too. This guide will be using Ubuntu 20.04.  The official Microsoft guide is here. Downloading and installing will take a few minutes.

This will download and extract Ubuntu2004 as a exe in the administrator’s home directory.  When you run it for the first time, you will configure a user and password. It will also become the default distribution when you run wsl.exe. We’ll be creating and using a user called demo with a password demo. 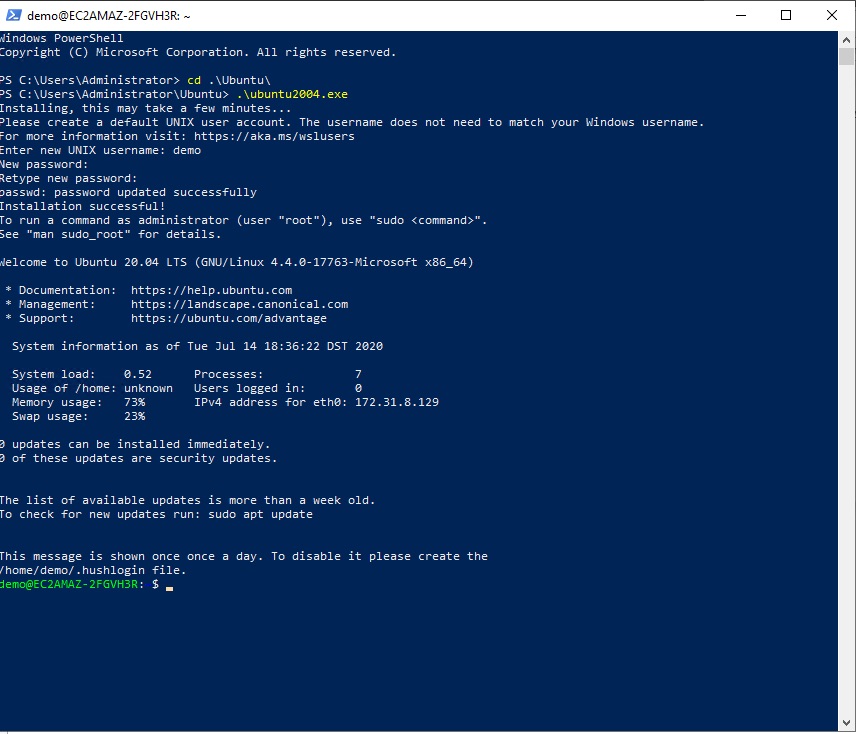 sudo ssh-keygen -A # Generate the ssh keys for the server

One downside of this setup is that there is no way to run WSL as a service. We’ll need to configure Windows to login and start WSL as a user via a Scheduled Task.

First, we need to allow the OpenSSH Server to start without authentication inside WSL Ubuntu

#Add this line below %sudo ALL=(ALL:ALL) ALL

On the development server, open Windows Task Scheduler and add our command as a startup task.

Move to Next > Trigger

Select When the Computer Starts

Move to Next > Action

Run the task and refresh it. You want it returning 0x0 as a status code. 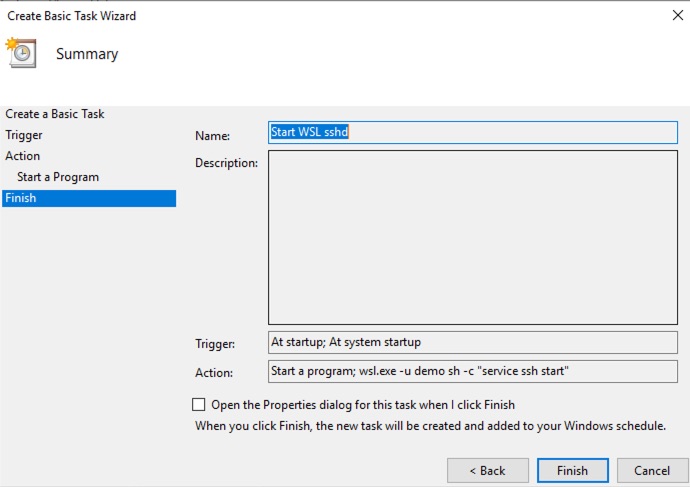 Select the task that just got created and enable it to always run. You will need to enter the credentials of the windows user, else it just won’t run.

Restart the server. The SSH server should be listening by default and you can move on to getting SSH access.

The AWS Security group with the traffic for 22 takes care of our AWS firewall access, but Windows Server 2019 will block the traffic by default.

Whether you installed OpenSSH Servber via Windows or WSL Ubuntu, you need to allow traffic on port 22.

You should now be able to open an ssh connection to the server. You will not be able to login by default because we must setup our authentication. By default, OpenSSH Server ships with password-based login disabled because it’s insecure. You’ll need to configure an SSH client on your local machine. On mac and linux, you should be able to open up terminal and have ssh dump its command line arguments.

Windows users, you must have an ssh client installed. If you’re running Windows 2019 or Windows 10, you can install the windows client version. While you can use Putty for now, the SSH keys pageant generates need to be converted to work with OpenSSH Serbver.

You can install the OpenSSH client for Windows on your local machine by opening an elevated powershell and running:
# Make sure that OpenSSH is available for

The first thing we need to do for Windows is copy the default config file to the run time location.

While we are in there, let’s turn on PublicKey Authentication for later by uncommenting and changing this line to yes.

And for temporary testing purposes, enable password based authentication by uncommenting and changing this line to yes.

Restart the OpenSSH Server. You should be able to login to your box using your RDP credentials.

And login with the same password retrieved via the pem key. The -vvv flag puts the Open SSH Client on your local machine into verbose mode and shows all the authentication steps it is trying. That kind of verbosity will aid you in troubleshooting connections and understanding what SSH is trying to do.

You should now be sitting at a remote terminal and can interact with CMD.

When you’re satisfied, be sure to set PasswordAuthentication to no in the copied C:\ProgramData\ssh\sshd_config.

Restart your server and get ready to configure some OpenSSH keys.

Login to WSL on the Development Server as demo.

In the WSL shell:

While we are in there, let’s turn on PublicKey Authentication for later by uncommenting and changing this line to yes.

And for temporary testing purposes, enable password based authentication by uncommenting and changing this line to yes.

Find and uncomment the line that allows Agent Forwarding

And login with the same password you created in WSL. The -vvv flag puts the Open SSH Client on your local machine into verbose mode and shows all the authentication steps it is trying. That kind of verbosity will aid you in troubleshooting connections and understanding what SSH is trying to do.

You should now be sitting at a remote terminal and can interact with Bash. While you are in Ubuntu, you can access your windows environment at /mnt/c.

That’s it! You should be SSHing into your box which the main thing required to setup remote code. Before we get to the really good stuff, Part two will talk about tweaking your installation to enable Public Key Authentication and other goodies. Part three will go over Visual Studio Code remote development and draw back the curtain on the power of this setup.

Brian Hatchet is a Senior BI Consultant at DesignMind.